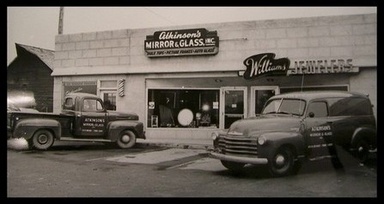 In 1951 in Boise, Idaho, Warren Atkinson converted the chicken coop behind his home on Boise’s Fairview Avenue into a workshop for glass beveling and mirror re-silvering. Joined by his eldest son R. Milton “Milt” Atkinson in the fall of 1952, their early success led to the incorporation of the business on June 11, 1953, along with three additional family members: Vernon Waits (Warren’s brother-in-law), J. Preston Atkinson (Warren’s brother) and R. Weldon Atkinson (Warren’s younger son). The grand opening of the retail store at 424 North Orchard was held on August 3, 1953. By 1958, continued growth prompted a decision to acquire property at 909 North Orchard — where the company continues operations to this day.

ATKINSON’S MIRROR & GLASS REMAINS A FAMILY BUSINESS. Subsequent to the health-related retirement of Vernon in 1966 and Warren’s unexpected death about six months later, W. Stanley “Stan” Bowman (Warren’s son-in-law) and Dale Reynolds joined the company as shareholders in 1970 and 1975 respectively. Another of the original shareholders, J. Preston, retired in 1973. A third generation of Atkinsons joined the operation when Rick Atkinson (Milt’s son) became a shareholder in 1981 and Dan Atkinson (Weldon’s son) did so in 1985. After 41 years with the business, Milt retired in 1993 and the last original shareholder, Weldon, retired in 1995.

ATKINSON’S HAS ALWAYS BEEN A PIONEER in introducing innovative glass and window products into the Idaho marketplace. In 1959, we introduced the original Winter-Seal aluminum window line. Thirty years later we were instrumental in ushering in the new era of vinyl-framed windows. We persist in our evaluation of developing glass, mirror and window technologies and scrutinize their application and suitability in the dynamic Idaho marketplace. Advancing the legacy built over our more than fifty year history provides us each the impetus, confidence and knowledge with which we continue to serve our customers.

Visit our Gallery Page
Get Your Free Estimate Contact Us Today